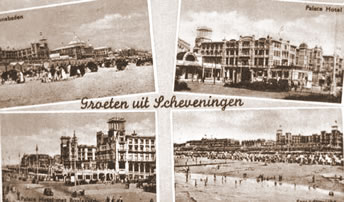 The name Scheveningen appears for the first time in a county's register that was prepared around 1284. The area is described as terram de Sceveninghe (land of Scheveningen). The current Scheveningen is mentioned for the first time in a document of 1357 in which villagers, through an official document, are requesting the benefits that come with having a county. Possibly an increasing demand for seafood of the new, rich settlement resulted that fishermen settled to the nearest coast line. 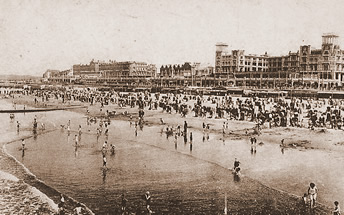 The village has been ravaged by floods for many times over the course of its history, where usually a portion of the buildings were washed away. In 1570, half of the village disappeared in the waves of the All Saints flood, so the church became on the edge of the village - which is nowadays still the case.

Until mid seventeenth century, Scheveningen was only connected with The Hague by a dune path, the Westerpad that ended at the Noordeinde in The Hague. In 1665 a road was constructed by the design of Constantijn Huygens that was a long, straight road, which improved the connection significantly. 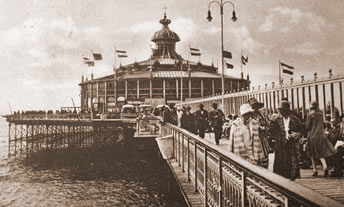 The bathing culture really started in Scheveningen when Mr. Cats constructed a retreat named 'Zorgvliet' in 1818 along the 'Scheveningseweg', it was a small wooden building with a waiting room and four little bathrooms that had a sea view. In 1820 he replaced it with a brick building. In 1828, Mr. Cats was bought out by the municipality of The Hague that built a municipal bathhouse there. A building with a central part and two wings. The municipal bathhouse was converted into a hotel when the private organization 'Maatschappij Zeebad' (Seabath Company) built the Kurhaus in 1884 with the help of the municipality. This building, which had the style of the Italian Renaissance, burned down a year later, but was subsequently rebuilt. The number of beds continued to grow ever since in Scheveningen. Other wealthy people built various large mansions and villas outside the village (especially to the northeast and east of it). 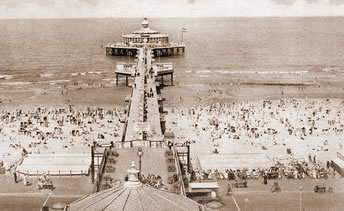 Seaside visitors went with beach coaches to the sea or took a sea bath in the bathing house. Bathing in seawater often happened on doctor's recommendation, because the sea had healing features. When in 1819 the next regulation of the mayor and Councilors of The Hague included: 'There shall be no bathing in the open seas unless one has a so called bathing suit' , swimwear industry made its entry. The seaside resort of Scheveningen developed from 1818 from a small spa to an increasingly becoming leading resort.

The fishing village of Scheveningen already counted many inns throughout the centuries; the large hotels arose at the end of the 20th century on the coast line of the seaside resort. From 1907 until 1953 Station Scheveningen was operating as the final point of the 'Hofpleinlijn'. From mid- 19th century wider roads such as the 'Badhuisweg' and 'Nieuwe Parklaan' from The Hague to Scheveningen were constructed. An exception is the 'Oude Scheveningseweg' which dates from the seventeenth century. With the advent of the car traffic in the 20th century, the peace and seclusion of the old fishing village became something from the past.